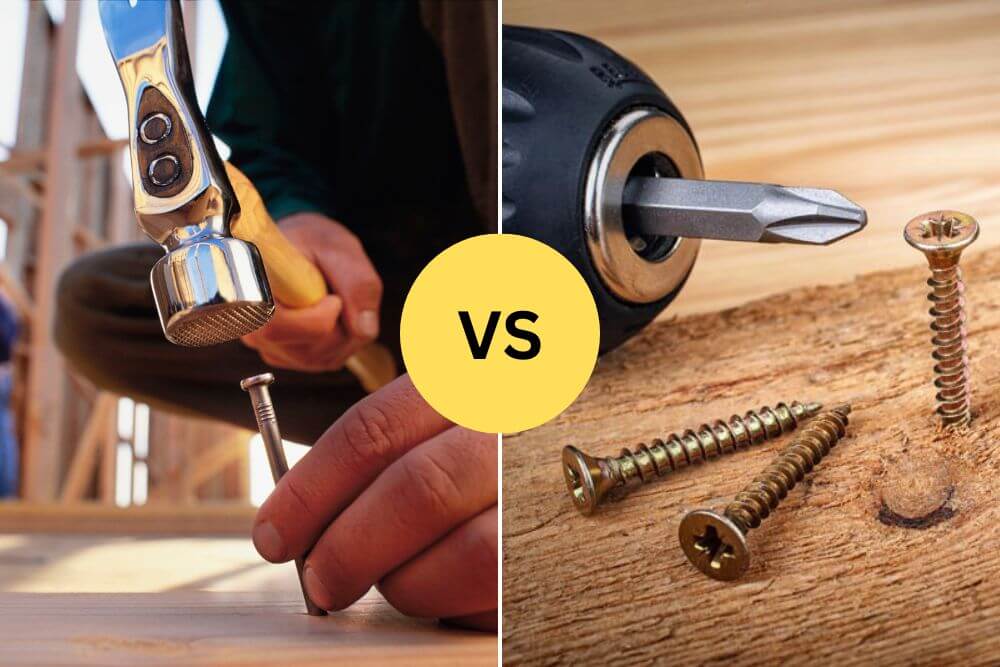 Both nails and screws are some of the most popular fasteners used in construction. They are both incredibly versatile and can be used for a variety of applications. But when it comes to framing, both have different uses and benefits.

It can be confusing which one to use since they both serve the same purpose, but it is important to know the difference so that your project turns out just the way you want it.

Let’s find out more about nails and screws so that you can make the best decision for your next framing project.

First, let’s learn a couple of things when it comes to using nails for framing.

Why use nails instead of screws for framing?

Framing works need to be incredibly sturdy since the whole structure of the house or building will be resting on it. Nails offer flexibility and work great under pressure, which is why they are ideal for framing projects.

What nails to use for framing?

There are a lot of different types and sizes of nails, so it can be confusing to know which ones to use. There are mainly 4 types of nails that are used in framing projects:

1. Common Nails: These nails are usually the first choice for most framing projects. They are about 2-3 inches long and have a smooth, round shank. The head is usually slightly larger than the diameter of the shank. The heavy shank gives sturdy support and is ideal for rough projects.

2. Box nails: Box nails are slightly smaller than common nails and have a thinner shaft. The head is also usually smaller. Because of their small size, they are less likely to cause any splits and are ideal for nailing into hardwoods.

3. Brad nails: Brad nails are made out of 18-gauge wire and are mostly used for trimming and molding. They are also used for nailing into hardwoods and plywood. Brad nails have a small head so they can be easily hidden with putty or paint.

4. Finish nails: If you are working on a project that requires a lot of finesse, then finish nails are the best option. They have a small head and a thin shaft which makes them ideal for nailing into delicate material such as molding or trim. Finish nails are also less likely to split the wood.

So these are the main 4 types of nails used in framing projects. As you can see each one has a different purpose so it is important to choose the right type of nail depending on your project.

What gauge nails for framing?

Nails offer more flexibility and are less likely to break or come undone. They are also easier to remove if you need to take the frame apart.

Screws, on the other hand, hold the wood together better and create a stronger connection so they are also less likely to loosen over time.

So for holding wood together, screws are better than nails. But for flexibility and ease of removal, nails are the better option.

So now that we have looked at nails, let’s take a look at screws.

Why use screws instead of nails for framing?

The answer is simple, more traction, more holding power, and less likely to loosen over time. If you look at the shape of a screw, you will notice that it is tapered. This means that it can grip the wood better and create a stronger connection.

Another advantage of screws is that they are less likely to loosen over time. This is because the threads of the screw create a lot of friction which prevents the screw from moving.

Nails, on the other hand, can loosen over time because they don’t have the same gripping power.

Screws are also easy to remove and can be reused but this is not the case with nails as they need to be hammered out. So if you are using screws instead of nails, there is less chance that you will damage the wood.

What size screws for framing?

A couple of framing screw popular options are structural screws and construction screws. A standard screw for framing work would be a number 9 (2.5-inch) as it is not that long but still offers a lot of holding power.

The screw size might also depend on the thickness of the wood. If you are working with thicker lumber, then you might need to use a longer screw such as a number 10 (3-inch).

Are screws stronger than nails?

In general, screws have more holding power than nails and can hold the wood together better. This is because of the way they are designed and the fact that they create more friction. Nails can loosen over time which is not the case with screws. So if you are looking for a stronger connection, then screws are the better option.

Can You Use Decking Screws For Framing?

No, decking screws are not an ideal choice for framing projects. This is because they are not as strong as other screws such as construction or structural screws. They can easily snap out of the wood, especially if you are using them in thinner lumber.

If you are looking for screws that are specifically designed for framing, then you should use construction or structural screws. These screws are stronger and can handle the weight of the frame better. So your frame will last longer and won’t break easily.

Which one is better for framing?

Now here comes the big question, which one is better for framing projects? Nails or screws?

The answer is that it depends on your project. If you need a stronger connection, then screws are the better option. However, if you are looking for more flexibility and easily applicable then nails are better.

It comes down to your personal preference and the project that you are working on. If you need more holding power, go for screws. If you need something more flexible, then go for nails.

But by a big margin, the most popular fastener for framing is screwed! This is because they offer more holding power, are less likely to loosen over time, and can be easily removed if necessary. So if you are still undecided, then we suggest going for screws.

So there you have it! A complete guide on nails vs screws for framing. We hope that this article has helped you to understand the differences between these two fasteners and which one would be better for your project. Make sure to consider all the factors mentioned above and then make your final decision. Good luck!

Brad is the ultimate DIY expert. Mostly self-taught, he has a lot of knowledge about the “do’s and donts” of nearly any home project. Brad routinely reviews new tools in the marketplace and provides a handful of helpful tips for aspiring do-it-yourselfers along the way. He is a lover of all things regarding building and creating.